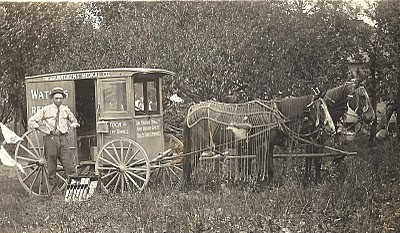 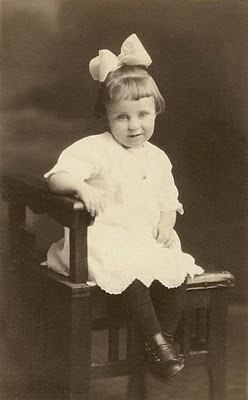 The Miller's first child died in infancy. She was named Bernadine and is buried in Jennings, Michigan but that's all we know. Then came Lola, or "Shorty," followed by Ed. Last was Esther Roberta, weighing in at only 4 pounds on January 3, 1920. Her mother said she was so small, they put her in a shoebox instead of a cradle.

When Esther was four, the family moved to Cadillac, Michigan, into a house that her father built. They had a coal furnace, indoor plumbing and electricity, of course, but her father didn't finish the upstairs, where the children slept, until a few years later.

A friendly neighbor, whom they called "Grandma" Markland, had no children of her own and she doted on the Miller children, particularly Esther. Esther remembers Grandma Markland allowing her to do anything and everything she wanted to. Esther also remembers being thrilled when her first grade teacher, Miss Nichol, invited her to lunch at a restaurant in downtown Cadillac.

Since Shorty and Ed were so much older than Esther, they didn't want to play with her. She did have a good friend named Alice and the two girls would play with their dolls together and walk them in their doll buggies up and down the sidewalk. Esther's father, who also had a special spot in his heart for her, made her a pair of stilts to play with.

Looking at the picture of Esther above, it's easy to see how everyone doted on that sweet-faced little girl. 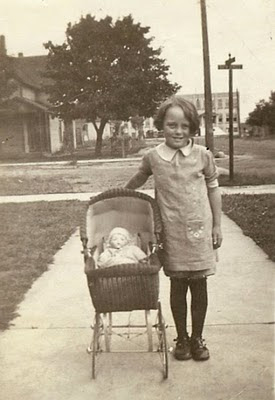 When Jim and I were getting married, my best woman kept telling me to remind my soon-to-be FIL Marvin, Jim’s best man, that he was responsible for making the toast at the reception. When the time came, Marvin stood up and mentioned how concerned I had seemed about it. Therefore, first thing that morning, he said, he got up and began working on it. Reaching into the breast pocket of his suit coat he said, “So here’s the toast…” and he pulled out a Mickey Mouse baggie with a piece of whole wheat toast in it.

He won my heart then and he's had a firm hold on it ever since.

Here's a picture of me losing it (that's Marvin on the right and my dad on the left) and in the second picture my dad is telling me I'm going to do alright in Jim's family.

I miss you, Dad, and I'm thinking of you today, Marvin. 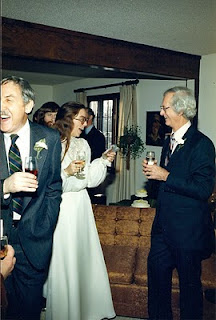 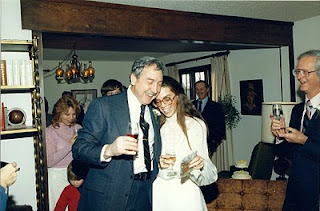 He's an urban dog, and something of a metrosexual. He walks on the sidewalk, not the grass, likes his gourmet treats as well as his monthly grooming, and wouldn't be caught dead drinking just any beverage. Yes, Charlie is quite the suave sophisticate and will even occasionally indulge the paparazzi.* 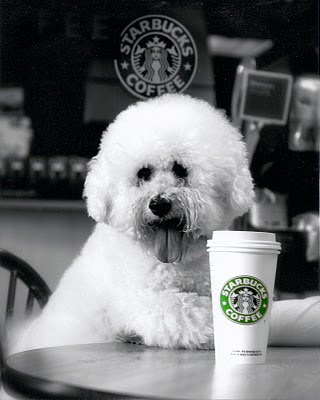 Charlie is a rescue dog. Typically that means that the dog (or other animal) was rescued by some kind-hearted animal lover. While that's technically correct, the real truth of the matter is these rescue animals more often than not rescue us humans, and such was the case with Charlie. We had lost our two old dogs within just weeks of each other and we were heartbroken. Although we had agreed that we would take a brief respite from the responsibilities of having a companion animal, it was only a matter of days before I was *just looking* through PetFinder listings. About 3 days in, my husband says that when he happened past and noticed the PetFinder logo on my computer screen, he knew immediately that we were about to get another dog.

We agreed that we would go as old as 8 since our old dogs, at nearly 17, made anything 8 and under seem like a pup. Sure enough, Charlie, 8 yrs and 2 months, popped up in our search and I think you can fill in the rest of the story. I don't think our grief would have healed like it did without Charlie, and certainly not as soon.

This past Monday, June 14, we celebrated Charlie's 13th birthday with some extra treats (but no coffee this time, sorry, Charlie) and with the removal of a few staples from some minor cosmetic work he had done. ;) Happy birthday, Charlie, you little chunky monkey. Thanks for rescuing us.

Posted by imeanit at 7:50 PM No comments:

Can I really embed a video? 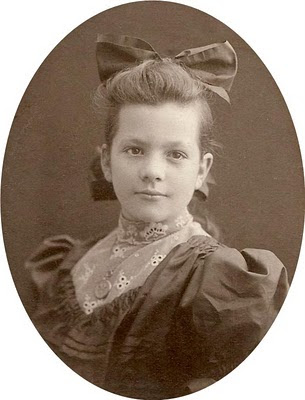 Once again I'm using this poor blog as a test site. Can I really embed my first video here? If you see a video below, please nominate me for some award or something, would you please? TYVM. Oh, and a little background info. This is an excerpt from the first oral history I ever did. It was with my grandmother, Bernice Scott Christle, in the spring of 1976. That's her in the picture above at approximately 12 or 13 years old. In this excerpt we talked about some family antiques, including her great-grandmother's spinning wheel and a burled or "curly" birch bedroom set, she had in storage at her uncle's house. Sadly, her uncle grew tired of storing them for her and chopped them up and burned them. The sadness in her voice as she spoke of that loss is pronounced. Oh, what I would have given to see those items and touch the spinning wheel that my great-great-great grandmother used to sit at and spin thread and yarn.

And that g-g-g-grandmother would have been the last woman in my line who demonstrated any proclivity for the domestic arts.

Afternoon at the Hotel Del Coronado circa 1920

I've been going through old family photos while working on my website and, as always, I keep coming back to one of my all-time favorites, the photo above.

So, what do you think about this moody, turn-of-the-century photo taken at the Hotel del Coronado in San Diego, California? It's the work of photographer Harold Taylor and quietly captures the pace and mood of the idyllic life at a popular resort in those days.

On the left is my "aunt" Lottie Hatch Neufeld and on the right is her cousin, Anna Hatch, standing over their aunt, Grace Bierce Hatch.
Posted by imeanit at 9:11 AM No comments: 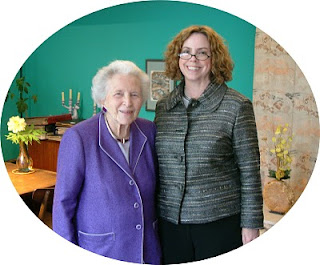 I've been working with Lansing/East Lansing icon, Betty Price, capturing an oral (and video) history of her. What a treasure this woman is! Topics we're covering include her life growing up in Saginaw, Michigan, her family's move to East Lansing when her father started the family business, Liebermann's, in Lansing in the depths of the Depression in 1931, the history of that treasured local business, and Betty's involvement in the founding of the Wharton Center for the Performing Arts at MSU. An avid reader with the sharpest mind of any 96 year old I know, Betty keeps up with current events and wouldn't dream of starting her day without thoroughly perusing both local and national newspapers. Betty continues her fund-raising activities for Michigan State University's Wharton Center and College of Arts and Letters, and just recently returned from Utica, New York, where she held a jewelry show in support of the local public library. Stay tuned for more updates on my talks with this fascinating woman. Above is a picture of Betty and me taken on Friday, May 21, 2010. Doesn't she look great?
Posted by imeanit at 3:25 PM No comments: 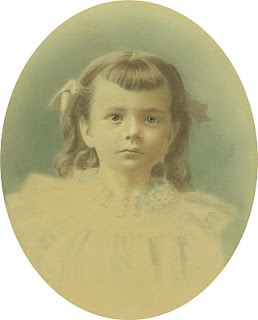 Welcome to Your Life and Times, a blog dedicated to the capture, preservation, and sharing of personal history and family memories.

My interest in personal and family history dates back to my early childhood and the little girl in the picture is largely responsible for it. That's my grandmother, Bernice Scott Christle, and the picture was taken in 1899 when she was 5 years old.

She had an ordinary childhood in an ordinary small town in the midwest and I couldn't be more fascinated. Join me as I share some of what I know about her, her life, and other of my ancestors and family members. Our families are more alike than not so my story, and her story, are much the same as the story of your life and times.
Posted by imeanit at 7:49 PM 1 comment: